The Art Of Superstition is the name of Illustrators Ireland’s 2013 Annual Exhibition.

WARNING! This post contains illustrated male genitals…. Actually, most of my work does. Carry on….

EDIT: this print of for sale at The Copper House Gallery. 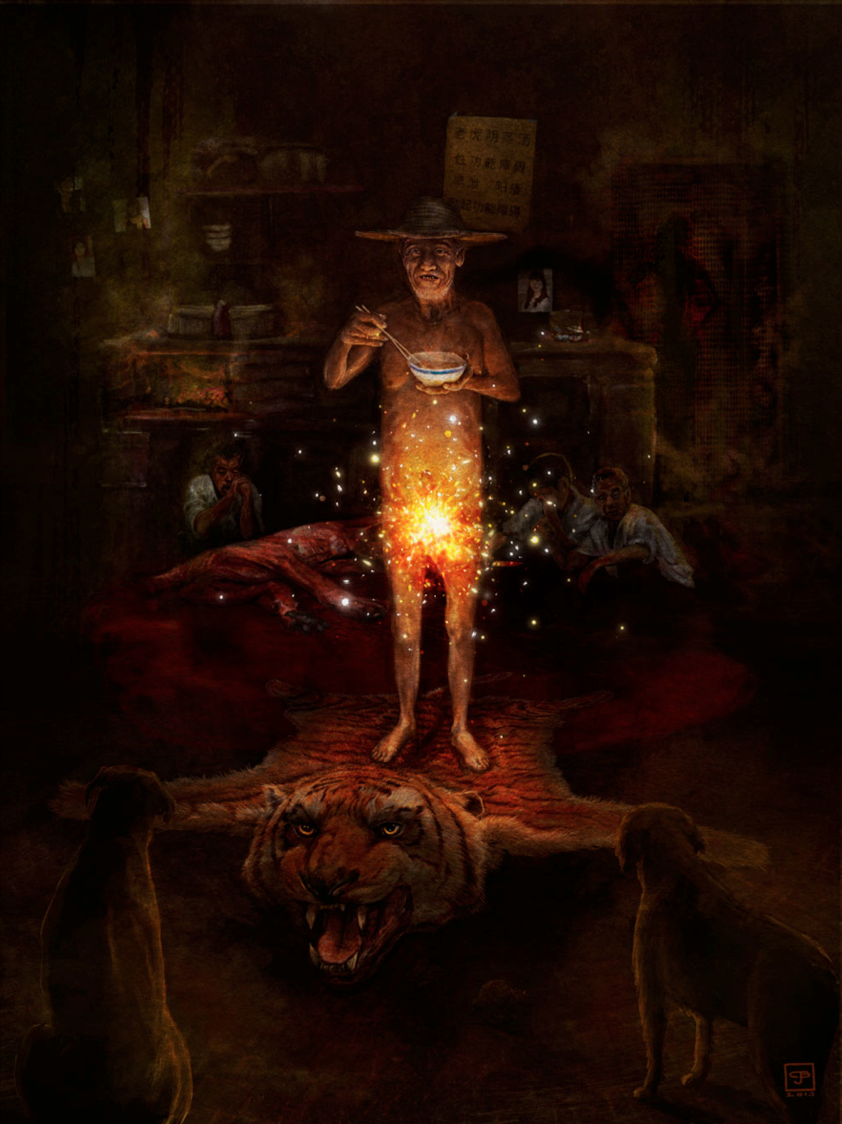 I began working on it, sketching out ideas, then began to put it together. I had decided on a landscape orientation, as it worked better for my idea and composition, but unfortunately when the template dimensions came through from the organisers, it appeared that the piece need to be portrait…. one thing lead to another, and i decided to start again on a different superstition, this time in portrait orientation (as an aside, it turned out  that i could have done landscape, but was far enough along, that i decided to just continue with the new one, and promised my self i’d get back and finish the other down the line… it will be made available to view when it’s done), so i went with something else i’d been thinking about doing for a while, that happened to fit the concept of the exhibition.

The Superstition that i decided scrutinise in this work is the belief of Chinese medicine practitioners, and presumably many people in Asia, that parts of tigers can be used to cure various ailments – more specifically, that Tiger penis can cure impotence, premature ejaculation, sexual dysfunction, and boost all round virility. Apparently it makes a lovely soup and is eagerly consumed by those stereotypically short changed in the trouser-snake department.

The title is a line from Eddie Murphy’s 1986 classic, The Golden Child. It was about Yak, but the gist is the same…

The initial idea was pretty simple – a naked Chinese man with a small but obvious erection, standing on a tiger-skin rug, eating a bowl of soup. I went looking for some text to go with it, and asked some friends to check that i had the phrases correct. 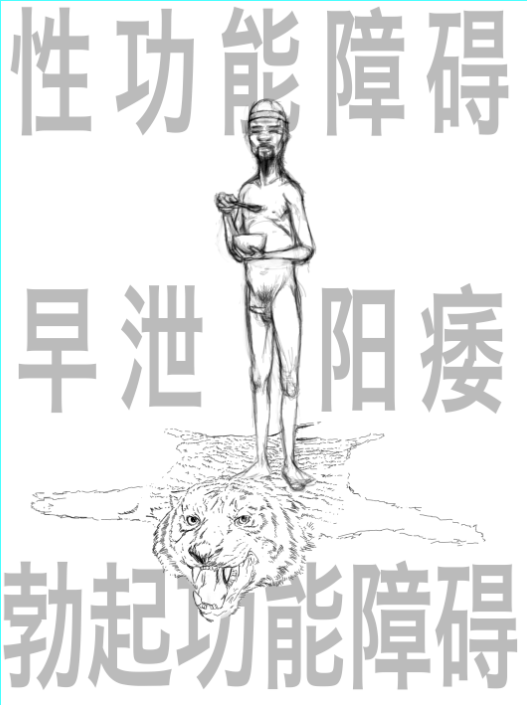 So the rendering began. I wasn’t completely sure where i was going with it, but knew that i needed to get the tiger looking pretty realistic to get the look i wanted, so after promising myself that, after the painstaking work of the Snum’s hair in “Sneelock’s Lament”, i would try not to go back down that avenue any time soon, i started back down that avenue. 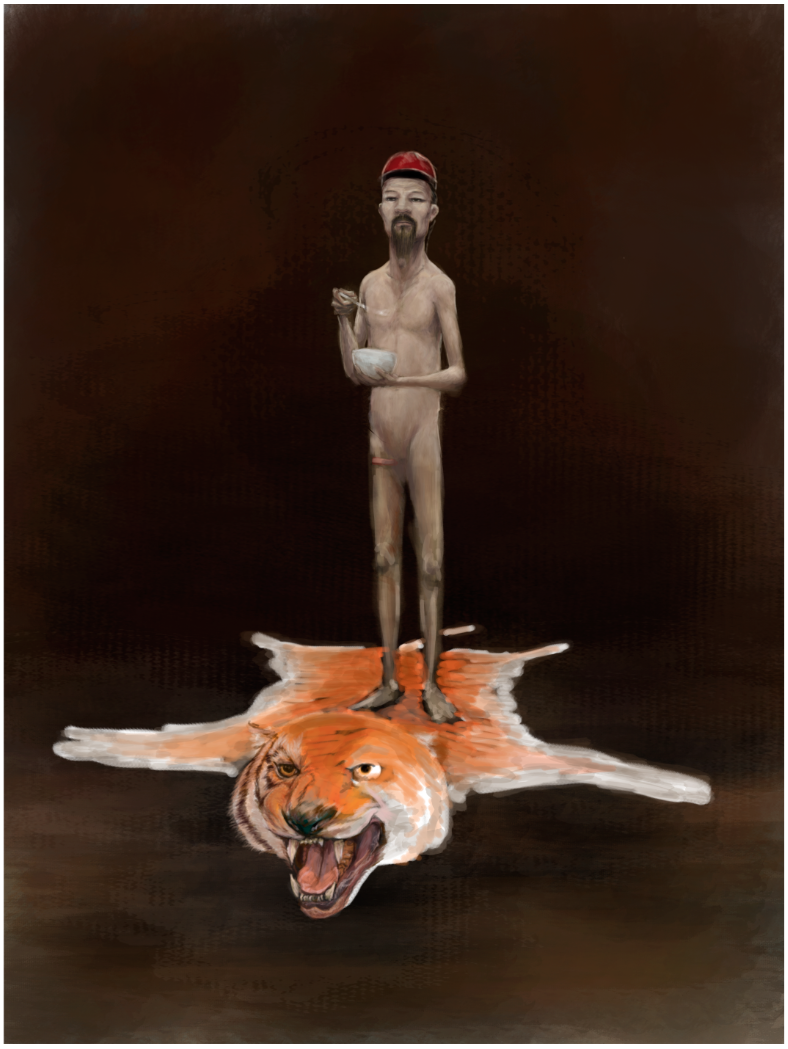 I decided that perhaps the man should have a magical glow around his groin, signifying the magical properties of the tiger penis soup, so worked it in, and started lighting the tiger to match. I wan’t really happy with the text being big as it was in the initial sketch, as incorporating text that way isn’t something i’m particularly comfortable with yet, so started thinking about what else i could be doing with it, and what sort of environment he might be in. I knew it needed to be dark, to emphasise the glow. 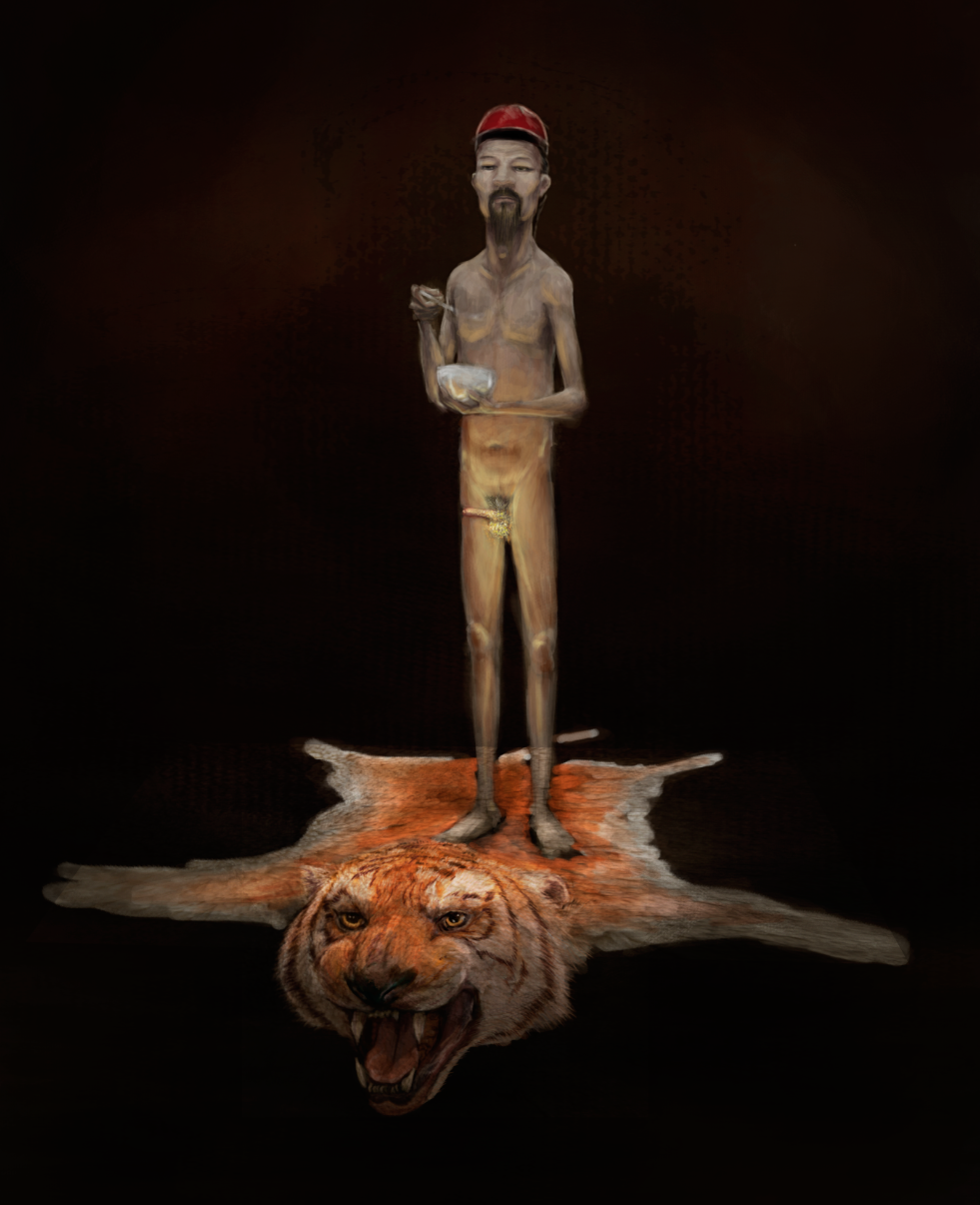 Having the skinned carcass of the tiger would be a suitable way of showing more of the grotesque nature of the  practice. It has to be said that researching tiger-skinning and butchery was pretty revolting, and it was kinda difficult having to study the images to get the carcass looking correct. 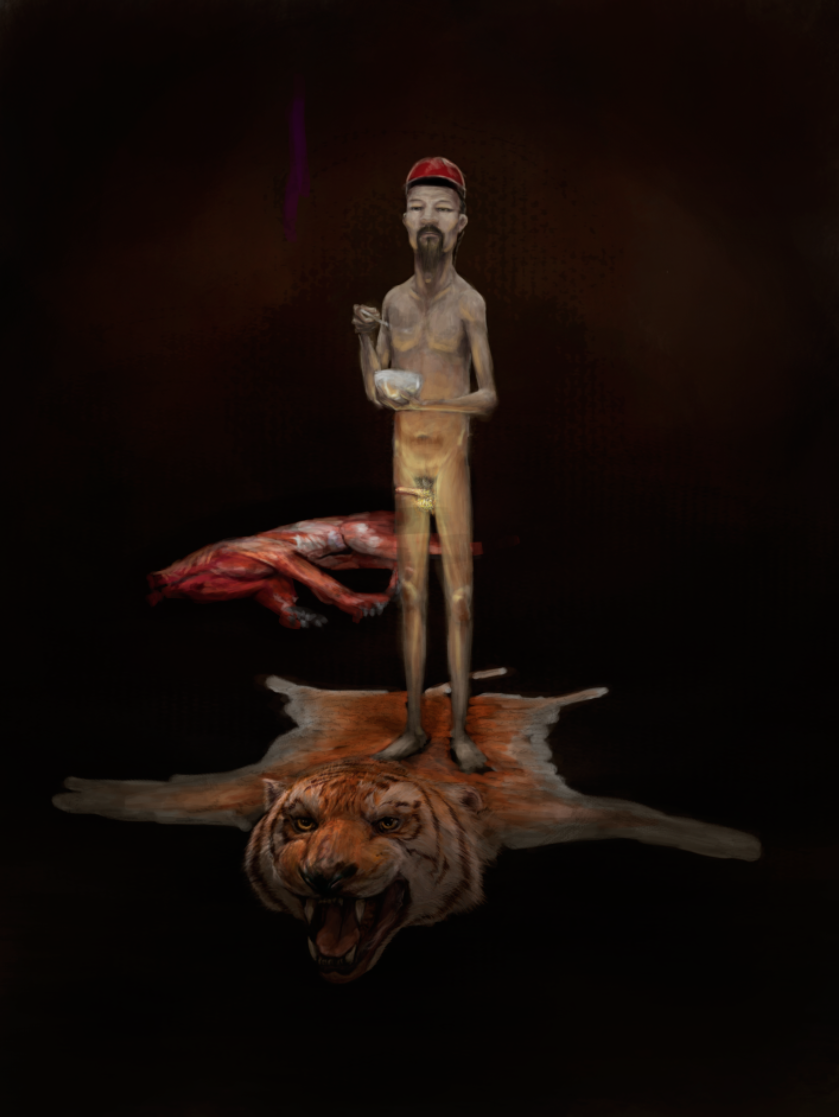 The I blocked in in a few men who would have been responsible for the skinning and butchering, looking fairly bored and indifferent with the whole thing – both of what they’d done, but also if the effect of the main guy. 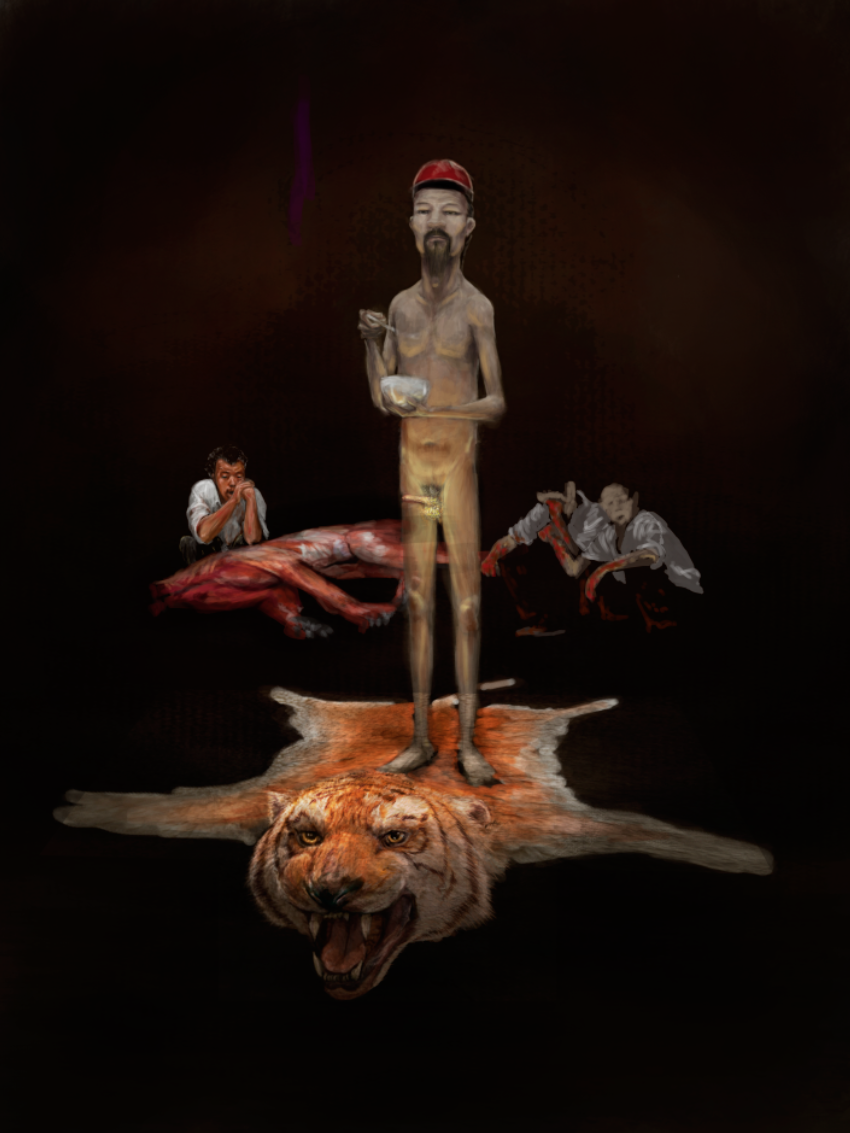 I began to be irked by the main character. He seemed out of proportion, and a little too cartoony still. I wasn’t happy with the face, and was worried that the hat would disappear into the shadows. Found a nice face reference, and began reworking him some more. I needed to try changing the body as well, as it was the face of an older man. The glow became a little more pronounced. 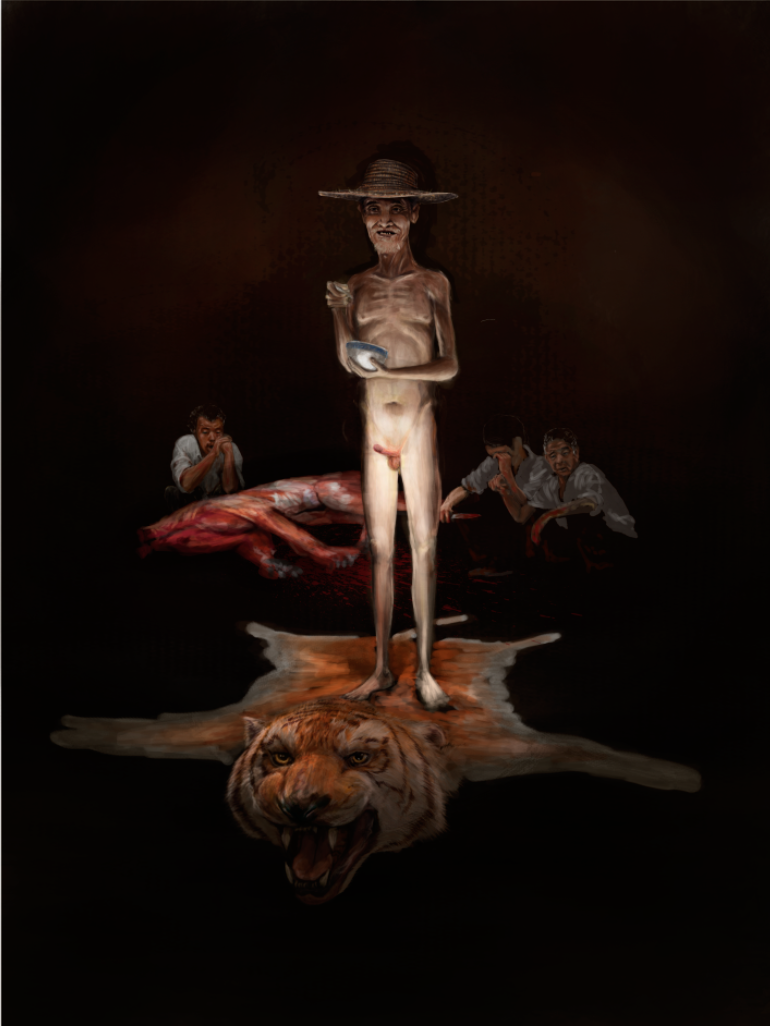 I stared trying to get the look of an “internal glow” happening around his groin, thighs and a little in the chest- as if power of the soup was surging through him. I wasn’t completely convinced i would have time or inclination to finish the effect, so i left it and began some more background. Looking through the reference images of how and where they butcher the tigers – generally dirty alleys and street stall looking places – and began to work this into the back ground. It would need to be set at night too, to get the full effect of the glow. I also decided that I’d still like the text in there some how, so placed it on a sheet of paper taped to the wall behind the stall, as hand written advertising for their wares. 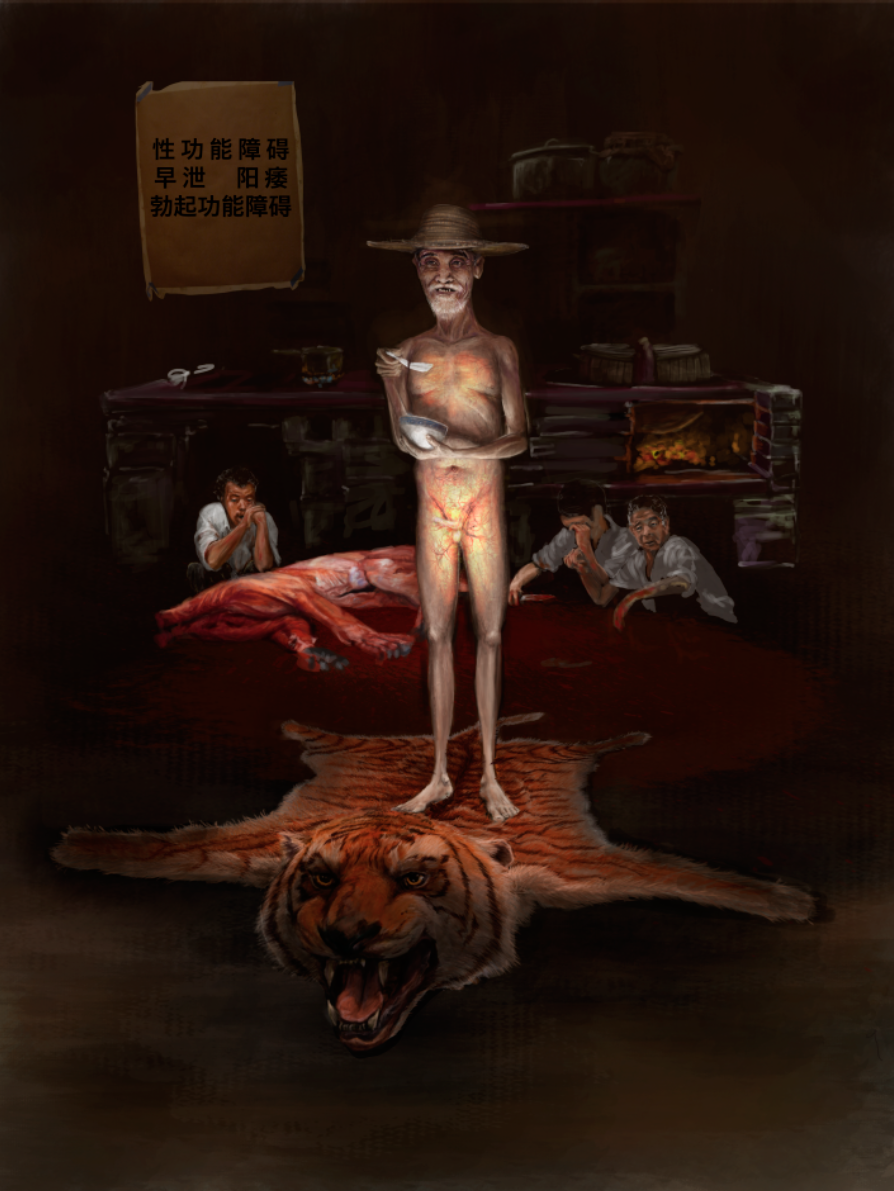 The internal glow was discarded, as it just wan’t working for me, though not i had to work out a way of getting decent external glow. I began playing with some texture layers at this point, as well as some coloured fill layers, to quickly generate a deeper, darker mood. The foreground was feeling  little empty too, so i worked up a couple of interested street dogs eyeing off the meat. 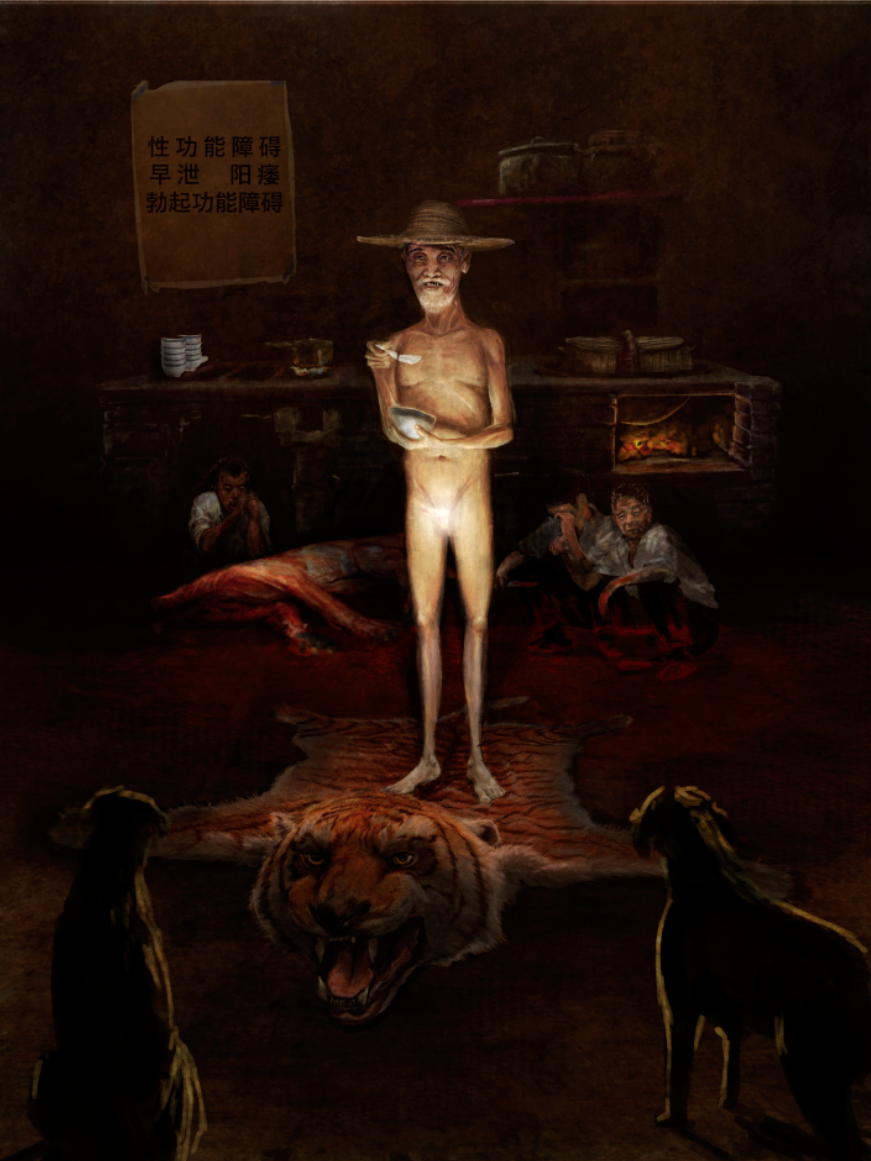 I became completely dissatisfied with the whole body – in particular how the hands were positioned, so began reworking it. This is why i love working digitally :). I found a better body reference, though had to trawl some fairly unsavoury sites to get the posture. You try googling “old naked man standing”, and see what you get. I think it was a fairly generic Nudism site that ended up having fairly non-homoerotic photographs, just so you know. Plenty of cycling too…. 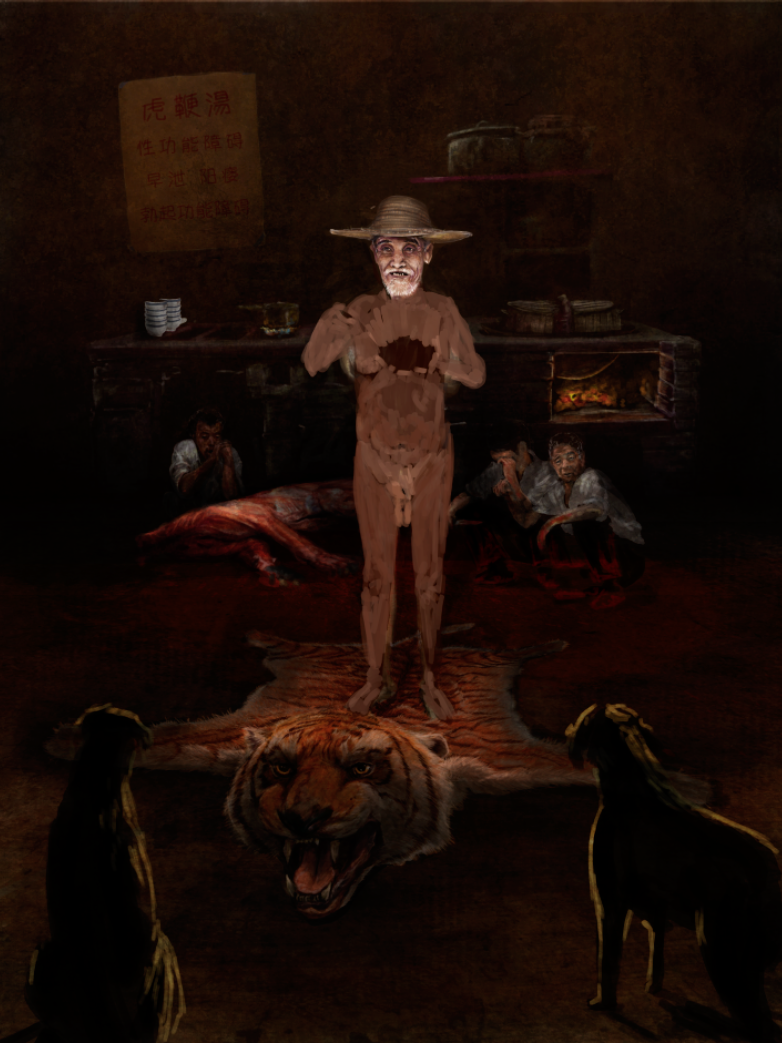 Layered on some more texture and fills while i worked out the body some more. 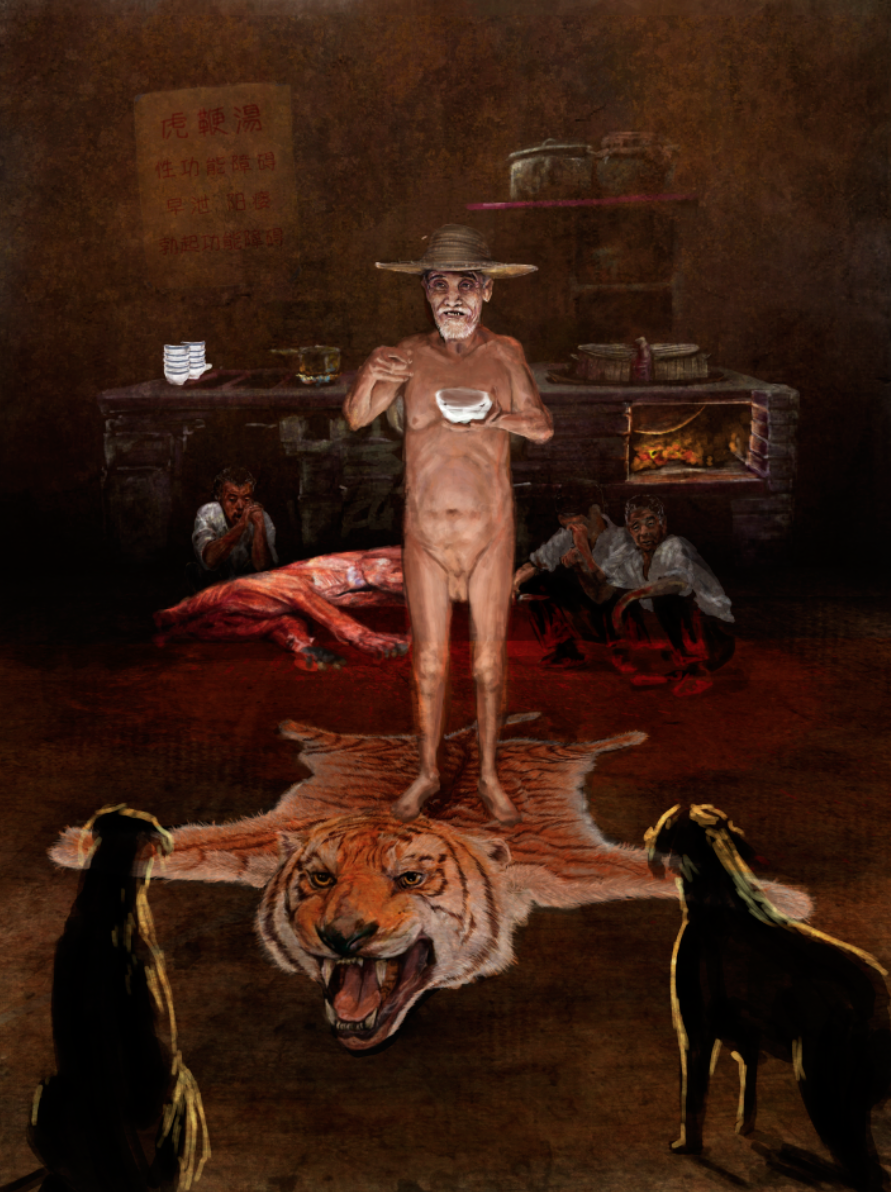 …and eventually got it back to a similar point  was at before i’d trashed the other body. While still not exactly as i’d like it, it was much better, so i could continue. 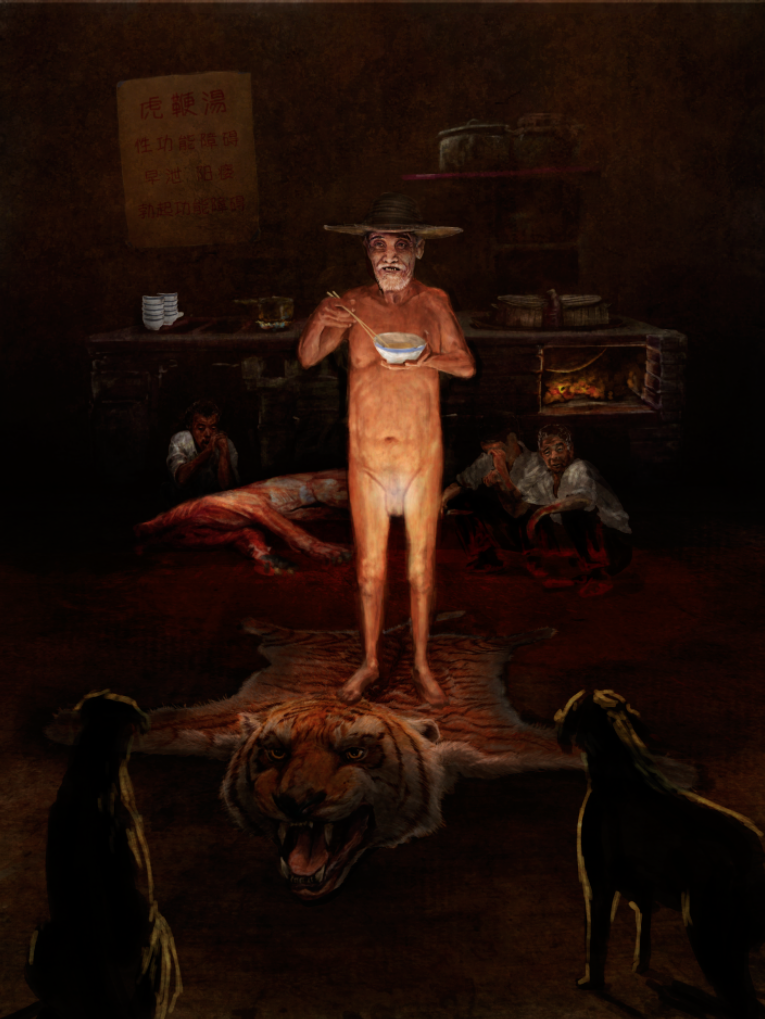 At this point i had an inexplicable and catastrophic corruption of the current file, and was unable to open the psd. I had the previous version (incremental saves are invaluable…), but it basically meant redoing the main man again, using the actual screenshot from above as a low resolution base. I also lost the work i’d done on the pots above the stove and some of the details around there, but sometimes it helps see things with new eyes. Eyes that make you say, nup, can’t be arsed redoing that….

I was talking to an old mate of mine who now lives and works in Indonesia after showing him the piece to get a gauge on the seedy asian side of the piece, and he suggested that (he was vaguely aware that) back ally sex shops could often (not that he’d know, really, but they might) sell some form of traditional aphrodisiac nearby, and why not add that aspect to the image. So the woman in the doorway behind a beaded curtain was added, as was the photographs of some of the attractive girls on offer inside. To make it all fit, and balance properly, i need to flip the kitchen around, make it smaller and shuffle it to the side a little. 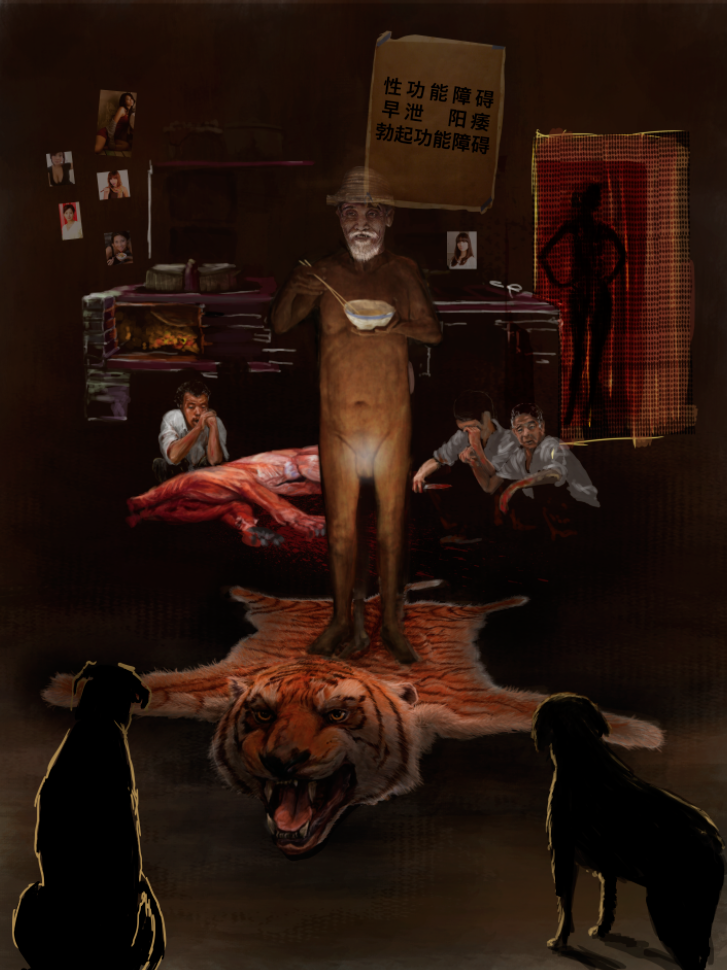 Some hours later i had fixed the man, and added textures and mouldy grime to the image, really trying to get the dirt in there. The pool of blood around the carcass was worked in a little more, and the lighting was refined further. Steam and smog helped close it in. 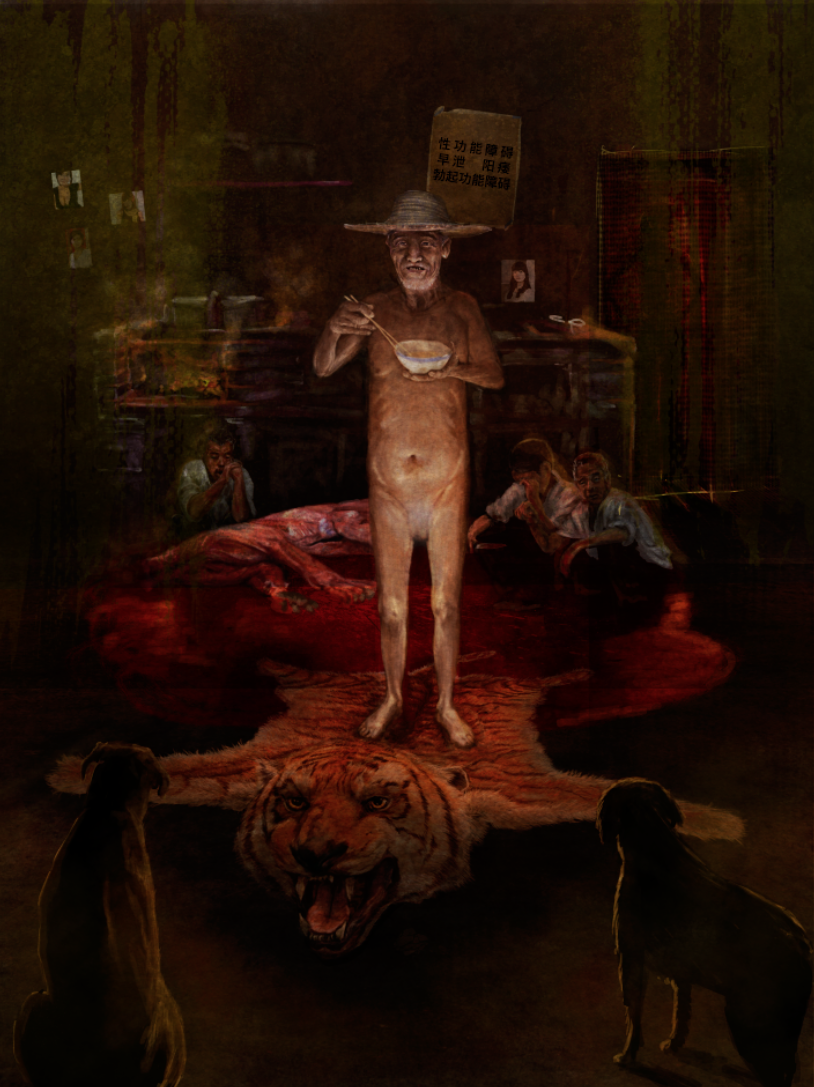 So began the glowing genitalia. I found some great free glow brushes online, and played around with them a little until they started to behave in a way that worked for me. I knew at this point that i’d probably be able to get the look i wanted, and was pretty relieved…. 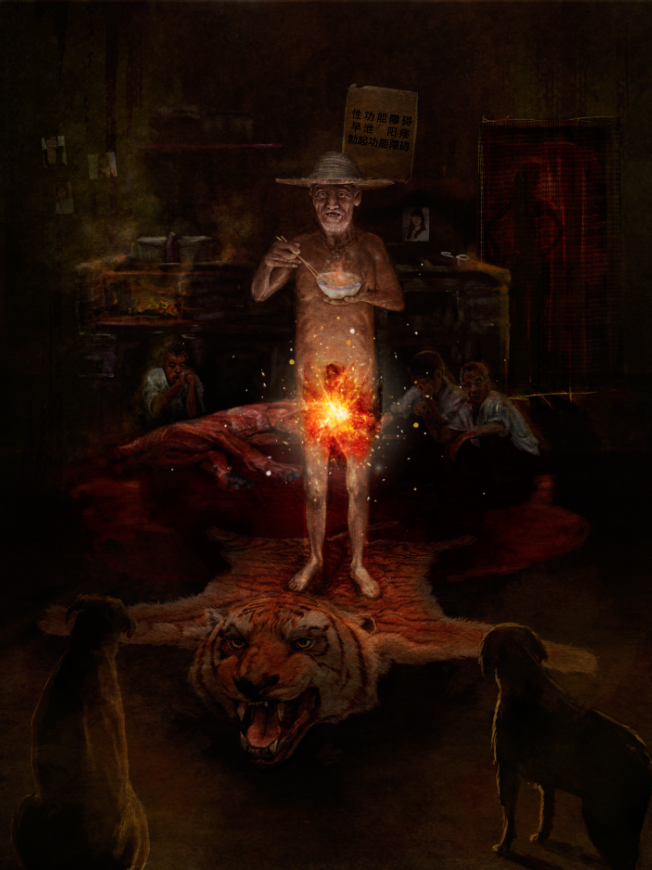 With that in mind, i continued with the lighting, adding some orange, yellow and red to the ambient light, as well as casting the direct light across the main man. Though it’s a little hard to pick up in this screen shot, i added a little rat to the foreground too…. they’re bound to be around.

Finally being fairly happy with how 90% of the image was looking, i revisited the glow and sparkles, and tried to really boost up the magic. Between the  ‘glow’ layers in the actual file, and the smart objects on those layers, them selves consisting of up to 10 layers, there could have ended up being about 150 layers just of glow in the final. Some have been blurred with varying opacity, but they’re still there….

All in all, i am pretty happy with how it turned out. As happens with any large work like this, i get sick of working on it, but also feel like I could keep tweaking for another several days to get it better – but as always, deadlines loom.

I was pretty disturbed in the course of working on this one, as the issues concerning this trade, and the survival of the tiger were all there to be seen. It is not just ignorance or superstition that is to blame: The use of endangered Tiger products and their medicines is also seen as a symbol or high status and wealth, and the recent increase in the standard of living in China and southeast Asia, had contributed to the demand for these products.

Indeed, China has almost eradicated it’s own Tiger population, and now sources Tigers from Bangladesh and Nepal. China is not alone in the mass slaughter of this endagerd animal – in Russia, poaching one Tiger can provide 10 years income on the black market. It’s estimated that in 1991, one third of the Siberian Tigers were killed to meet demand for Chinese medicine supplies.

As mentioned, it is not just the penis that is used in Chinese medicine: In Taiwan, a bowl of Tiger penis soup goes for US$320, and a pair of eyes (to fight epilepsy and malaria) for US$170. Powdered Tiger humerus bone (for treating ulcers rheumatism and typhoid) brings up to US$1,450 lb. in Seoul. As few as 3,200 Tigers exist in the wild today. It is fair to say that this superstition, pandering to the sexual insecurities of men across the patriarchal societies of asia, is complete fantasy, horribly and unnecessarily destructive, and well deserving of, not only being completely eradicated, but also of our utter contempt.

One Reply to “Good To Keep The Yang Up: for The Art Of Superstition”