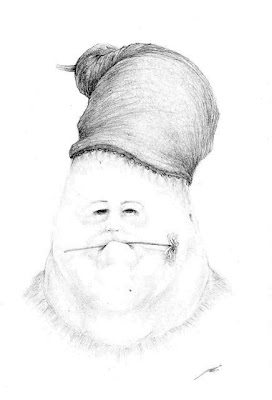 Another pencil in sketchbook piece.

Not sure what the thing is on his head is – possibly a leech, or a hat with teeth.

Terrible scan though. Will have to try it again… 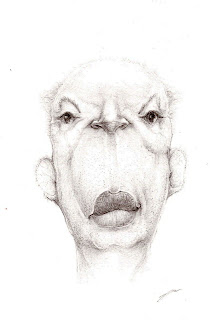 The feel of lead dragging across good paper. Love it.

Another sketch that began with no real direction while sitting around.  The location of the ears was helped along by my 3yo who found the pencil and sketch pad while i was out one evening, and drew one of them in. I had been thinking about placing them low, but i guess he helped finalise the decision…. 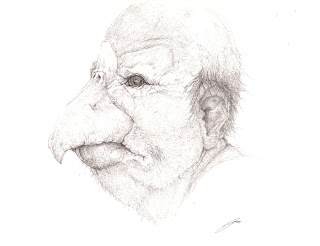 Taken as far as i can in the small sketchbook i have, the next step is possibly trying to colour it up some how.Kinda like it like this though…. 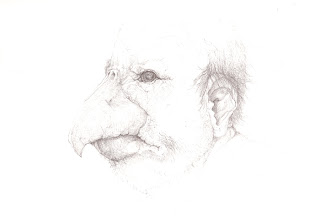 Got a bit more time at it last night while watching telly. 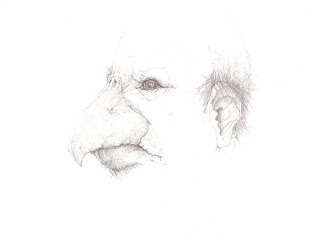 Good Lord! Is it late March already? I haven’t put up anything since before Christmas…. after a very dark and long winter, filled with flu after flu being passed on between the 2 kids, the missus and myself (we all nearly drowned on the amount of snot pooling in the house), it would appear all is clear, the sun is back, and the finger has been pulled out.

So to ensure people that I haven’t died, I thought i’d put up a sketch i’m working on, more of a doodle really. It began yesterday when the Girl was asleep (finally) and i had a hankering for drawing, but couldn’t leave her alone in case she fell off the couch.

This is not digital, by the way.

It’s been quite some time since i used pencil for anything other than scratching out ideas for complete works – really rough sketches – so i took the time here to feel the lead on the surface of the page, and just see where it took me. I’m still not sure where it is taking me, other than i know i probably should have started this in a larger notebook… the spiral bind is going to stop me being able to finish the top of the head, and  the chin may loose out too. ~sigh~
Let’s call this a work in progress; I’ll put up more as it progresses….