Giselle is one of the most recognised and popular Ballets ever. Or so I’m reliably informed… In short, it’s a story a of a love triangle that goes pear shaped. There’s a man who loves a young woman, she’s kinda into him, but then is also kinda getting into another fella, who’s a fancy Count in disguise (who is, incidentally promised to another woman – making this thing a little bit more of a square, but she doesn’t really feature that much… she’s a spare angle.)

The first fella gets a bit sus about the other fella stealing his girl, and starts looking into him a bit, and discovers he’s the Count who lives in the big house on the hill. He exposes the Count as a fraud, and Giselle gets all beside herself, and dies of grief. Or embarrassment. Hard to say. There was a lot of dancing….

Then it all move to the forest where Giselle is buried. There are dangerous spirits  called Wilis (pronounced Willies), the ghosts of young women who have died before their wedding day, presumed to be virgins, who live in the forrest. They are ruled by a Queen, and the come out at night to be spooky around any poor men who are out late. That evening they welcome Giselle into the fold. At the same time, the first guy has come to the forrest to lay flowers at her grave. Now, the Wilis have a habit of “dancing to death the men they come across, and so it begins. They set out to do this guy in, and Giselle pleads the Queen to let him go unharmed. The queen agrees, Giselle is happy, man is happy, ballet over. 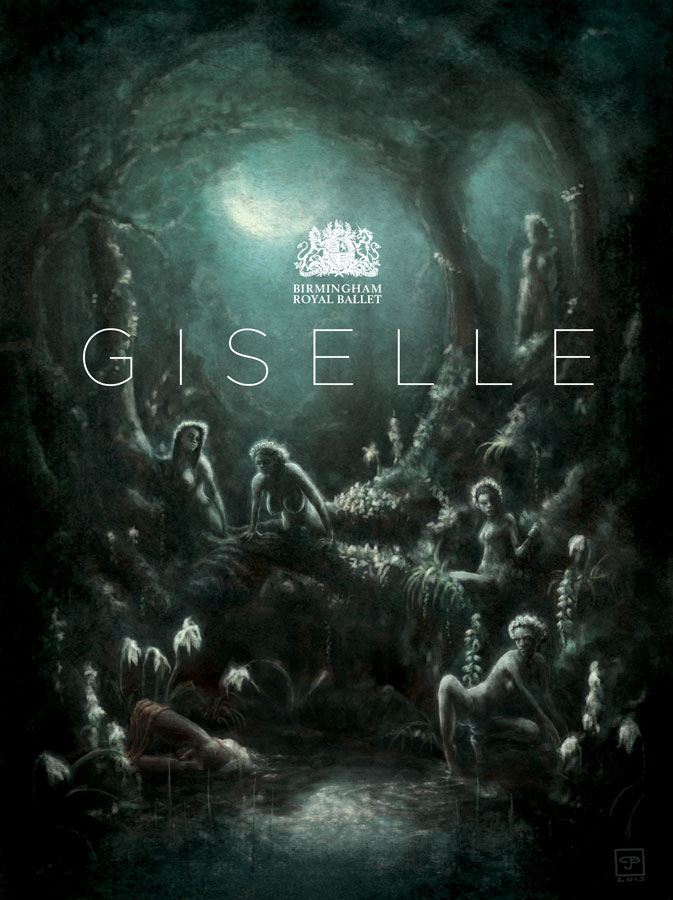 So this was the ballet story. The brief was to make a poster for the 2013 Point Blank exhibition, which is a bit of a side arm to the Royal Birmingham Ballet. We were asked to come up with something inspired by the story, whether it related to ballet or not, so i was given scope to investigate further.

So I researched Wiles – young women died before wedding day, cursed to haunt the forrest forever. They often ‘Danced to death’ wayward men who ventured too close too late in the evening. I took this to mean sex. Most evil spirits are into it, right?

In the story they often dumped the dead body in the lake or stream near by. I began a bunch of sketches.

The Wilis could be suggestive and provocative; after all, they were out for sex – and because of the ballet aspect, quite limber…. 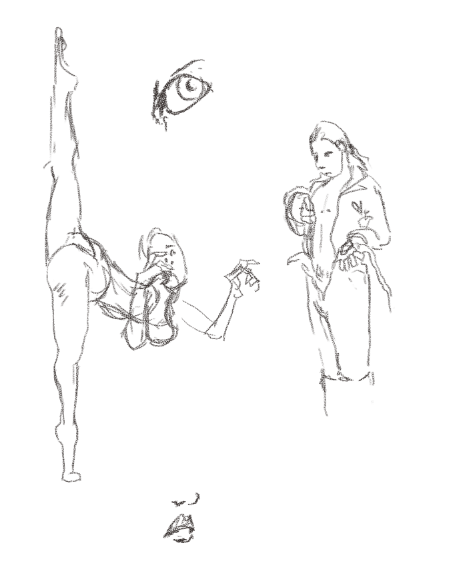 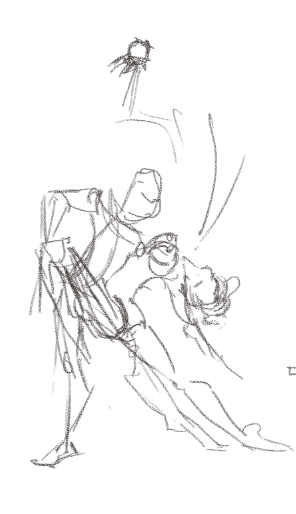 Should there be interaction with a man? 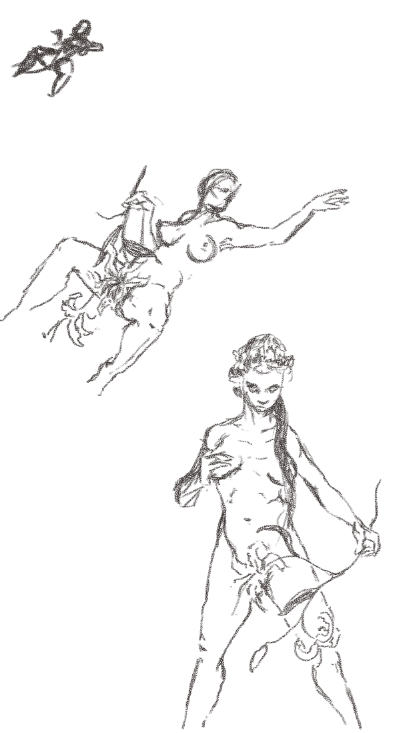 Or would they be reclining and enticing in less aggressive ways? 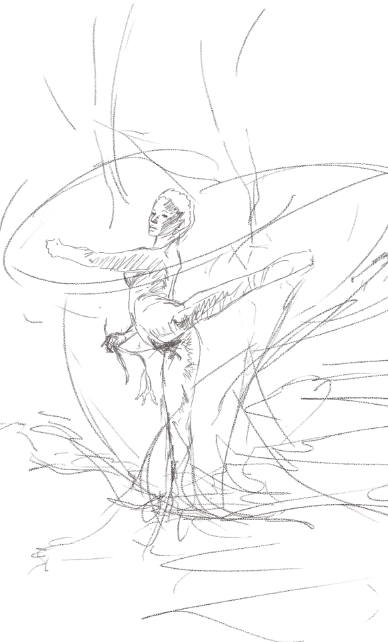 Perhaps they might indeed dance initially to get the attention of the man…? 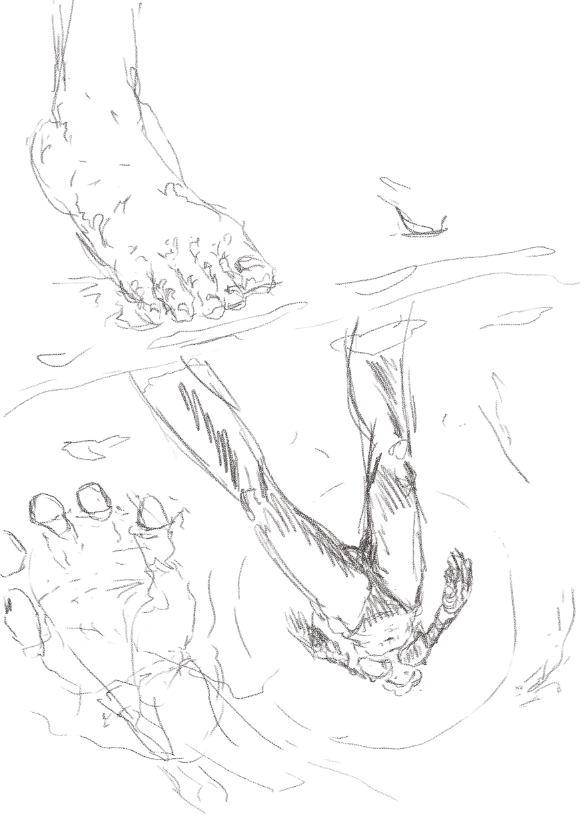 Or would it be too late….? The aftermath?

There were aspects of a few of these that interested me, and i discovered that what i wanted to capture was indeed the aftermath. I knew that i wanted to have a body in the lake, with the Wilis around. I decided that the image needed to have a serene quality – enough time needed to have passed after the dancing and sex, and after the body had been dumped, for the lake to once again be still and calm, and that the full moon would light the forrest scene. But it also need to have a feeling of the supernatural menace now sated.

I began to block in some basic composition, and kept the colours limited, to try and capture the vibe of the thing. 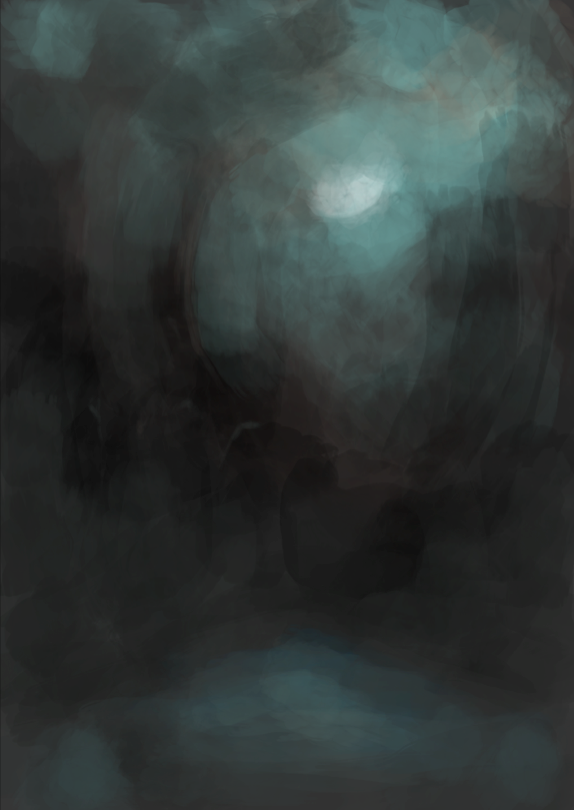 I decided to have the lower half of the mans body still out of the water, as if the Wilis might have been still engaged in intercourse while he drowned, trying to get the last out of him before he died. The queen would be over seeing the proceedings form the background, with others looking disinterested now it was done, or kind of checking that it was done.

I liked the dancing figure from the sketches, and i felt it would make it tie in with the ballet a little, so worked her in too. 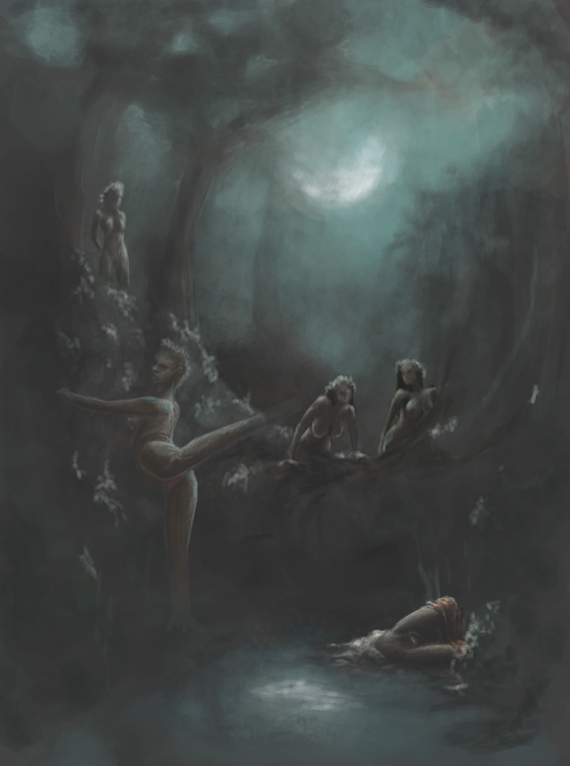 I began to work up the environment a little more, creating the roots and rocks around the water, and the moss and growth that covered them. The forrest began to take shape in the back ground, as did the sky. 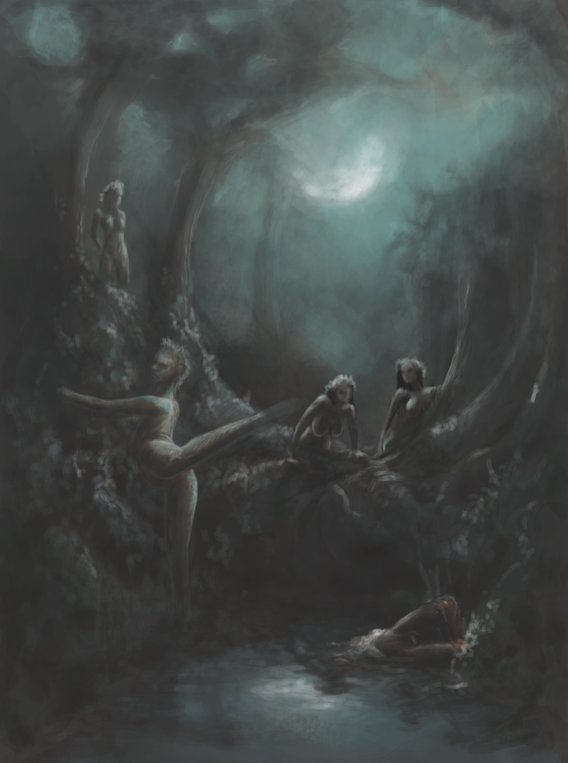 I flip the canvas quite a lot while working to check for balance, and to see the image in a new light, but i couldn’t resolve the dancer. She didn’t fit in the composition for me, and i found her quite distracting, so let her go.

Instead, I added 2 more Wilis. Another disinterested one sitting down, and one in the foreground that would have the most interaction with the body. Had she finished him off? Was she checking he was dead? Did she just have dirty feet?

I worked in some highlights to create the silvery glow from the moon, and kept working on the plants and environment – lilies, bell flowers, creeping vines like ivy, fungi, ferns etc… and the reflections in the water that would be quite important in creating the supernatural mood of the lake in the forrest at night. 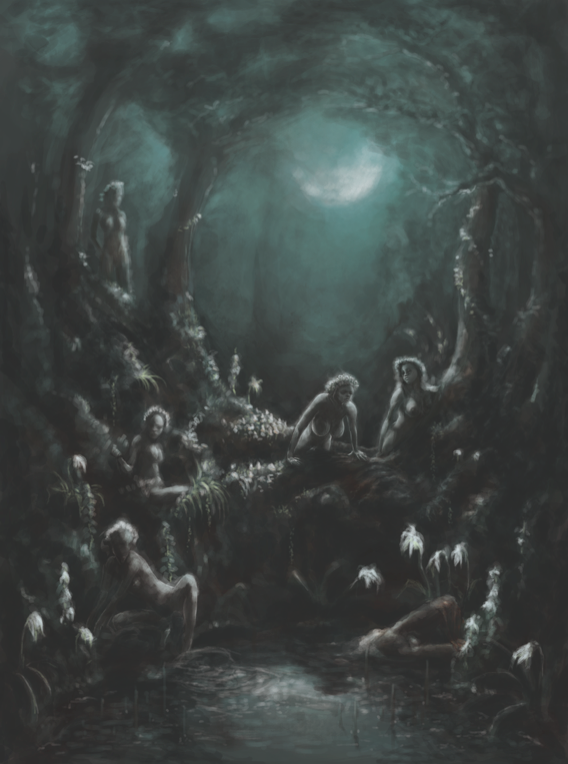 I started to bring in some texture too, as they can help create the mood a little more quickly. Flipping the canvas also worked better with the text that would end up on the image – something that i had to keep in mind. I wanted to try keeping it fairly loose, with only small areas of specific, tight detail, and i also knew that i’d need to do something with the faces – finish them to one extent or another, but avoid taking them into caricature, as i’m prone to do.

I continued to detail and to light the scene using adjustment layers and  masked fill/gradient layers. 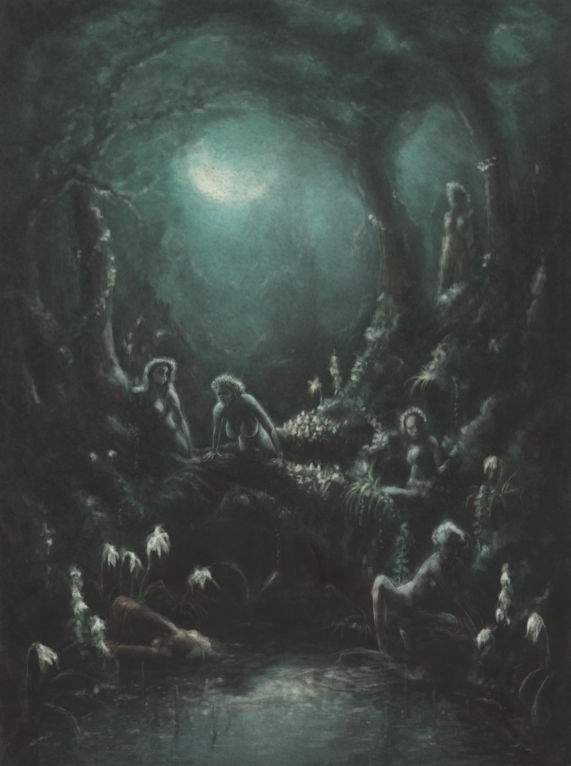 In the end i was happy with hoe the faces turned out. I felt I could have worked on it for another few days, but the deadline was up, so i had to let it go.

Here is the finished piece without the text…. 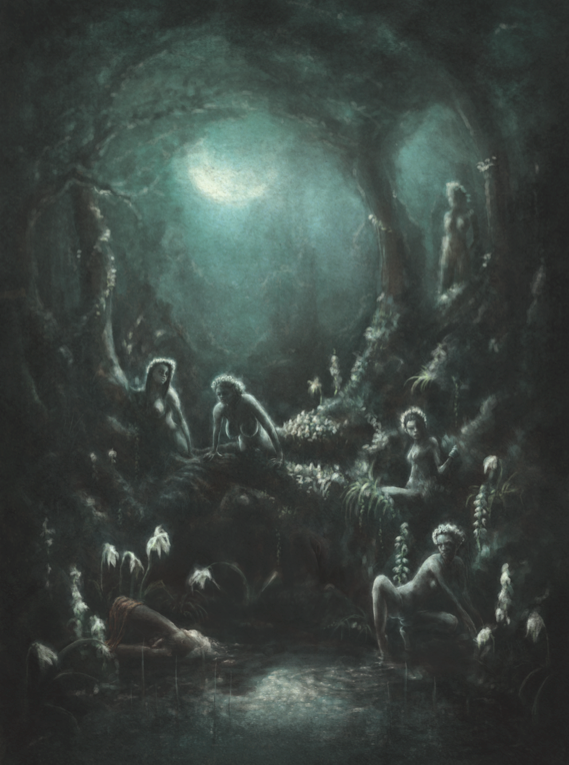